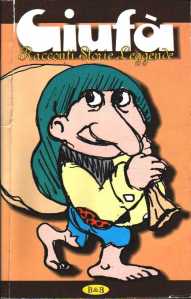 When I mention that I’m writing a book set in Sicily, some people recommend Sicilian books or writers to read. Giuseppe Pitrè, the best known writer/collector of Sicilian folktales, often comes up. One of the most famous characters in his writings is Giufà, a character of Sicilian folklore, a kind of “village fool” whose anecdotes lead to a moral at the end of the tale. Some believe that he is based on Nasruddin, a Turkish folk character whose stories were told and assimilated during the Islamic period in Sicily. Other scholars say he is also part of the Judeo-Spanish oral tradition in stories handed down through generations of Jewish families living in Turkey, Greece, Israel, Bulgaria and the Maghreb.

In any case, Giufà is recognizable in the antics of the village fool of Irish literature too, from JM Synge’s Playboy to Donal Ryan’s Jonsey Cunliffe.

At the local library here Collections of Pitrè’s folktales were only available in Sicilian, in big old green leather-bound encylopaedic-like editions. Curious, I had a look. You encounter the Sicilian dialect on a daily basis here, and while I can understand some oft-repeated words they use in jokes or in anger, it was a revelation to see it written down. Sicilian has been recognised as distinct enough from standard Italian to be considered a separate language but – there are about ten different Sicilian dialects across the island.

WordPress.com is the best place for your personal blog or business site.